Hi everybody! So I signed up for NaNoWriMo again this year, for a couple of reasons. First up, to get me back onto Live Journal, and secondly to see if I can actually write a fan fic or two. I've had a couple of ideas bouncing around in my head for a couple of months, so I thought to myself; "Why not?" and "How hard can it be?"

I'm just starting to remember just how hard fifty thousand words can be, so the next month will be fraught. Especially considering I have a wedding to go to next weekend (not mine. Always important to point that out when you're older than a certain age) and the weekend after I'm away for four days interstate catching up with friends and doing a five kilometre colour run.

When you think about it, NaNoWriMo must be a bit like child birth. From the outside looking in, you think to yourself "Yeah, that does look like it's slightly painful, but how hard can it be if women keep getting pregnant with second, third and even fourth babies? I might give that a go." And then you do give it  a go, and sweet Christ on a crutch WHY WOULD ANYONE DO THIS?!?!?! EVER?!?!? And you think it's never going to end, but time seems to move so fast, but so incredibly slow at the same time, and for the life of you words are starting to lose their meaning, and have I written the word 'Green' too many times? Then again, would using a different word or green make my writing seem too pretenious, and like I'm trying too hard? But then it's over and you forget the sleepless nights, and the back pain from sitting down at your computer for too long, and in October the next year, you think to yourself "I thnk I'll sign up again. It's wasn't THAT bad last year."

But it is. It always is.

So, wish me luck! I have a feeling that I'm going to need it.

I went to a friends house last night, for a barbeque and games to ring in the new year and it was lovely. I was home in bed by 1 am, and as I had only had 3 Pimms with ginger beer and lemonade in a 6 hour period, I was fine to drive home.

Someone asked me if my boss had gone back to Canada - his brother had a stroke recently, but he (the brother) is starting to get better - and I said no, he'd gone to Tumut. When asked why he went there, I told them how he had a friend there who owned a 'wine farm'. Yes, I realise now that I should have said 'vineyard', but at the time wine farm made more sense, but from now on, they shall be wine farms. And the people who work them shall be wine farmers.

I'm trying to give up Face Book, as I've come to the realisation that I only really care about maybe 10 people on it, and all the rest have incredibly drama-filled lives of their own creation that I don't care to know about, so I'm going to cut back to only looking at it on Sundays and that's it. So expect more posts here where I try to be witty.


*2013's resolution was to learn the song, but I forgot for about 6 months, and I've only really got 3 stanzas memorised. Ironically, the one year I don't have something about to do with getting healthy and fitter is the year I run in 3 fun runs.

In case I don't get a chance before Thursday when I'm off to the beach for Xmas with the family and niece and nephew (Fish and Chips on the beach Xmas day! Gotta love the Australian Christmas!) I hope you all have a happy and healthy Solstice/Festivus/Christmas/Whatever Religious or Pagan Holiday occurs between now and January.

Take care, have fun and relax.

A friend just texted me what will forever be considered the greatest question of all time:

What sound would the love child of Xena Warrior Princess and Turtle Man Make?

My brain has exploded from all the awesome.

(My answer was - the child would say "I'm Chuck Norris, bitch.")

I'm off tomorrow to the other side of the country for 2 and a half days, because that's the way I roll. I can't wait to see my friends! I have missed them so much, and getting to catch up, and see City and Colour live will be brilliant. I'll be a tired little teddy next week, but it will all be worth it.

Today I overheard the processing superintendent talking to someone and he said "No, I'm D.C.", and my first thought was "I can't believe he doesn't like Marvel."

... 5 minutes later I realised he was talking to an electrician and they were discussing currents.


(Still don't know exactly what they were talking about. That'll learn me to eavesdrop.)

I think you're pretty awesome. You're on my flist for a reason, and that's because I find you interesting and funny and I enjoy reading your posts. We are all so different, but we all have at least one thing in common, which is pretty freakin' cool. (I hope it's because you also like to take dance breaks when doing the house work, but it's okay if it's not.)

The world is a vast place, but you are not alone. So the next time you're having a coffee or a wine or even a bottle of water and it's just you in your house, raise it up and Cheers. I'll be doing the same thing in my time zone, and the way the universe works there will be a good chance that the waves raising our glasses/mugs/bottles make in the universe with collide. 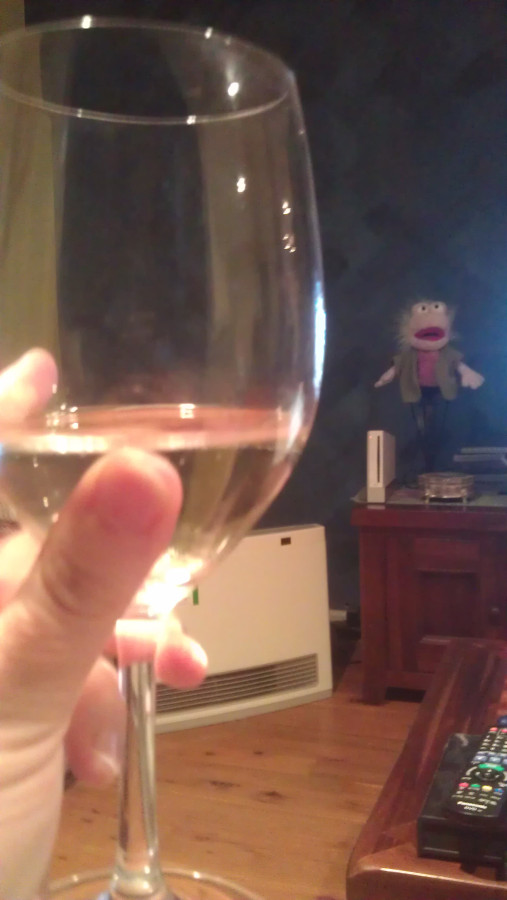 ...yeah, that's a Mokey Fraggle Hand Puppet in the back ground. She watches me watching TV.

My iPod died last week; it was five years old, and I stupidly thought to myself "I'm impressed how it's going considering how much I use it. (Probably 10 hours a day - the office gets loud and it drowns out the annoying people, and the bus ride of work is 40 minutes each way). It started only half playing songs, and skipping certain bands and singers (My iPod apparently hates Adele and The Axis of Awesome), until finally last week while I was charging it on the computer a warning came up with basically said "You are so incredibly f-ed right now. You really have no idea" (but it said it in tech-speak, but let's face it. This is what it meant. And it won't connect to my computer, and instead of having 5 thousand songs on it, it only has two.

Five years is a good run, and the closest repair shop is a two hour drive away, so I thought, "screw it!" and bought a new one. When I get home, I find that my version of iTunes is too old, so I download a newer one. To find out my computer OS is too old, and I can only buy that from a store.

I've got music on my phone, but I don't like playing music on my phone; call me old-fashioned, but dammit, I want my phone to be used as a phone (And for checking Face Book at work.) and that's it. Music devices are for music, phones are for communicating.

Remember the old days of Walkmans and Discmans? I miss those days. All you needed was to make sure you had spare batteries, and it they started going wonky, you hit them a couple of times, and blew on the moving parts. That was good times.

I ended up completing the NaNoWriMo Challenge 10 am Thursday 28th November (I finished off with 50,172 words). Thank you so very much for putting up with my ramblings! I didn't end up posting a lot of it on here, as it ended up being a heap more personal than I thought it would - and considering what I did post here, you can only imagine what that means. Actually don't imagine what that means, because it didn't mean 'that'. If 'that' is what you're thinking.

I want to do it again next year, but with an actual plan in place, and actually writing a couple of short stories as well. I did end up writing two poems, but my god! I wrote like I was an emotional teenage girl who knows sadness without ever having experienced it. Plath and Eliot were my two favourite poets as a teenager, and it shows.

Anyway, thanks again. It was fun, yet painful. I ended up learning a lot about myself, because of it, and I want to use what I learnt to change parts of my life. ::Fingers crossed::

I hope all those who write proper novels succeeded or at least ended up in a place that they're happy with.
Collapse